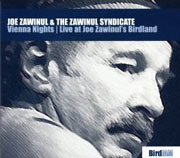 The September issue of Jazziz magazine includes a page-and-a-half article by Bill Milkowski about Zawinul and Vienna Nights.

A post by Ian Ingram on the Zawinul Fans Mailing List tipped me off that BBC4 will air an hour-long program on September 16 about the life and work of Joe Zawinul. It includes Joe demonstrating his keyboards, and concert footage of the Zawinul Syndicate. It is planned that the program will be released by newly formed Calliope Media in conjunction with BBC Worldwide.

This past weekend the Zawinul Syndicate returned to Yoshi’s Jazz House after a six-year absence, and man, did they make up for lost time. They positively incinerated the place. I’m half tempted to drive up to Yoshi’s tonight just to make sure the club is still standing.

As you might expect of someone that runs a Zawinul web site, I like Joe’s music a lot, though I try not to be a gushing fan about it. Well, I guess I’m going to have to gush for this report because these shows really knocked me out. I’ve seen the Zawinul Syndicate perform many times (and Weather Report, too, on numerous occasions), and these past four nights surely rank among the top. The band was simply on fire.

The engagement started on Thursday night, and by all rights the band should have been tired. Having played a gig in Guadalajara, Mexico the night before, they were out of their hotels and on the road at five in the morning, with two sets to play at 8:00 and 10:00 that night. Travel problems delayed the arrival of equipment and the sound check. Nevertheless, they got after it from the git go, and blew the doors down in the second set of with a performance of “Badia/Boogie Woogie Waltz” that generated an intensity I’ve rarely witnessed. From there, the energy seemed to grow each night, climaxed by a stunning show Sunday to close out the run. Even the Yoshi’s regulars were awed.

Those of us in the San Francisco Bay Area are lucky to have a venue like Yoshi’s, as well as the Kuumbwa Jazz Center in Santa Cruz, where the Syndicate played a year and a half ago. These smaller clubs afford us the opportunity to see the band up close, and observe Joe conducting the band from behind his keyboards. These shows at Yoshi’s were exhilerating. Nobody else is doing what this band is doing. For those of you in Southern California, catching the Syndicate at Catalina’s this week is a must.

Kolkata Newsline has published a two-part interview of long-time Syndicate guitarist Amit Chatterjee. Amit was born in Kolkata (Calcutta), India and lived there until he moved to the United States with his family at the age of 12.

A couple of new Zawinul interviews have been published as part of the promotion for the Zawinul Syndicate’s North American shows. As of January 2007, the NewCity Chicago Zawinul Article is still online. The Lansing State Journal article on the Detroit International Jazz Festival is not.