Zawinul and Bobby McFerrin played a series of three concerts together in August, and Roger Biwandu, the drummer on those dates, filled me in on the performances.

The line up with Zawinul and McFerrin was just Linley [Marthe] on bass and me–a great quartet. We saw each other during the soundcheck in Germany to see what we could play. It was already great and we knew that there would be a lot of improvisations. To me the first show was the best, surely because of the magic of first shows. We were like connected, the beginning and the ending, the solos, everything was some pure magic. The audience felt it, and it was awesome.

It was a very great experience and really nice to be on stage and to improvise with this music genius. Bobby is a big Weather Report fan (like everybody), so often we were singing some old tunes written by Joe that he himself cannot remember!!! It was just fun.

You can check out Roger’s other projects at his web site, www.rogerbiwandu.com.

Photographer Johann Marcus Streitner captured Zawinul’s first performance this week at his Vienna club Birdland. [The photos appear to be no longer posted on the Internet.]

Former Weather Report keyboard tech Jim Swanson sent some photos from the Syndicate’s August 25th performance at the Hollywood Bowl. (That’s Jim and Brian Risner, Weather Report’s Chief Meteorologist, on the right.) Jim was invited by Joe’s son Ivan to help out with the concert, and along with another WR alumnus, Brian Risner, it was a bit of reunion. Jim reports that Amit Chatterjee was called away due to a family emergency, and Scott Henderson filled on short notice, cancelling his 50th birthday gig at La Va Lee’s and learning the charts on the day of the show. Reports are that he sounded great with the band–even at rehearsal.

Henderson will perform with the band in Vienna and Milan (see the Tour Dates page), along with Linley Marthe, Arto Tuncboyaciyan, Sabine Kabongo, and Karim Ziad on drums. Also scheduled to play with the band in Vienna is guitarist Alegre Corréa. With Henderson and multi-instrumentalists and vocalists Tuncboyaciyan and Ziad, Zawinul has a new palette of sounds to draw from. I don’t know how long it will last, but it will be interesting to see how this new line-up evolves.

By the way, I picked up the new Trio Mundo CD with Manolo Badrena. I like it. Check it out! 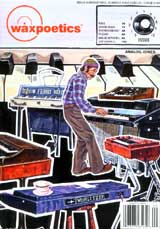 I am pleased to announce that my in-depth article about Zawinul is the cover story of the issue No. 9 of Wax Poetics magazine. If you aren’t hip to Wax Poetics, you should check it out just for this article–one of the longest to published about Joe. It covers Joe’s development as an electronic keyboardist from 1966–when his use of the Wurlitzer electric piano helped transfrom “Mercy, Mercy, Mercy” to a national hit–to his early use of analog synthesizers with Weather Report. The article includes material from new interviews with Zawinul as well as Roger Powell, Brian Risner and Jim Swanson.

I know I’m tooting my own horn a bit, but my friend Andy Forward, the most avid Zawinul collector that I know, calls the article “the best (as in well written and well researched) thing I have read about Joe.” You can find Wax Poetics at Tower Records (in the Dance and Techno section), or check the magazine’s web site for purchasing information. All of the previous issues but one are sold out, so don’t delay if you want this.

Yeah, I know, it’s been a while… I’m going to work my way backwards from the latest news.

First, let’s talk about the Syndicate’s recent line-up changes. The band’s most recent gig at the Hollywood Bowl on August 25 found them sporting a line-up consisting of Sabine Kabongo, bassplayer Linley Marthe, drummer Roger Biwandu, Armenian percussionist Arto Tuncboyaciyan, and… Scott Henderson(!) on guitar. That counts as a major shake-up in my book.

The first change took place before the summer European tour, when percussionist Manolo Badrena left the band, replaced by Jorge Bezerra. Badrena was the longest running member of the Syndicate, and though I have no information as to what precipitated the split, I do know that he is co-leading the group Trio Mundo with guitarist Dave Stryker. The group recently released Rides Again, its follow-up to 2002’s Carnival. On Rides Again, Badrena makes his debut on drum set, and the group has some gigs in the northeastern US this fall. Meanwhile, Nathaniel Townsley was replaced by Karim Ziad on at least some of the summer dates. Ziad has manned the Syndicate drum chair in the past. Townsley may have had prior commitments that prevented him from completing the tour, but that’s just speculation.

After the European summer concert season, the Syndicate was booked for six nights in August at the Blue Note in New York, but those gigs got canceled. However, the Syndicate headlined the August 25 concert at the Hollywood Bowl that included Michael Brecker’s and Dave Holland’s bands. And lo and behold, there was a new but familiar figure on guitar: Scott Henderson. (Check out the Scott Henderson discussion forum for photos.) He needs no introduction to long-time Zawinul fans, having performed on the albums The Immigrants (1988), Black Water (1989). (Man, has it been that long?) Since then, Henderson has lead the fusion group Tribal Tech with Gary Willis, and carved out a successful career as a blues guitarist, with several albums to his name.

So what happened to guitarist/vocalist Amit Chatterjee? Again, hard to know. Chatterjee had been a steady member of the Syndicate since 2001, and his soaring voice and rhythmic guitar playing had become a fixture. He was still with the Syndicate at the end of July. According to a message posted on the Scott Henderson Discussion Forum, purportedly from Henderson himself, Scott canceled a gig at a local club in order to perform with Zawinul that night at the Hollywood Bowl, saying, “I’m sorry but I won’t be playing at La Ve Lee tonight. Joe Zawinul needs me to play in his band at the Hollywood Bowl because his guitar player cancelled.” I don’t know if the guitar player who “canceled” was Chatterjee or someone else.

I understand that Henderson will also perform with Zawinul when the band takes up residence for the week of September 28 at Joe’s Birdland club in Vienna, as well as a six-night run the following week at the Blue Note in Milan, Italy. Beyond that, we’ll have to see. Henderson is much more of a soloist than Chatterjee was–and I don’t think he sings, either :-)–so it will be interesting to see how his presence in the band shapes the music.

Okay, lets cover a few other odds and ends. First, Joe played a few concerts this summer with vocalist Bobby McFerrin. McFerrin collaborated with Joe on his 1986 album Dialects. No word has come my way on what pieces they performed.

And finally, some months back Roger Biwandu was kind enough to send me the new CD by former Syndicate bassplayer Etienne MBappe. Misiya is an engaging album that I have enjoyed playing. It reveals that MBappe is a multifaceted musician, much in the same way that Richard Bona’s albums show off the breadth of his musicianship. Here MBappe composed 13 of the 14 tunes, plays bass and sings the lead vocals, and arranged the string sections. More information, including audio samples, can be found on alapage.com.