B.B. King died on Thursday at the age of 89 years old. He was a true legend in American music, claiming the mantle of King Of The Blues for six decades. He was also one of the hardest working men in the music business–something that Joe must have appreciated. It is said that in 1956 King performed an astonishing 342 one-night stands. He maintained a vigorous touring schedule well into his eighties.

There are two connections between King and Zawinul that I am aware of. Back in the early days of Weather Report, the band would sometimes open for popular acts such as The Ike & Tina Turner Revue, Frank Zappa and the Mothers Of Invention, or Fleetwood Mac. Their music didn’t always go over well with these audiences, who were there to see the headliner and not some “spacey” jazz band, as so many reviewers referred to Weather Report. 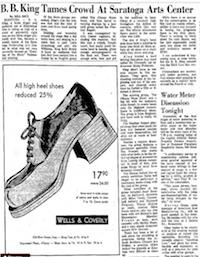 the summer of 1973, Weather Report performed as the middle act on bill that included The Climax Blues Band and the headliner, B.B. King and his nine-piece band. Having won a Grammy in 1970 for his recording of “The Thrill Is Gone,” King was very popular at the time; in fact, he was the most popular blues artist there had ever been. More than 3,500 fans came to the Saratoga Performing Arts Center to see him, but had to sit through the opening acts first. According to one review, by the time King hit the stage, the audience had “first been rocked into a frenzy” by the U.K. based Climax Blues Band, but was “bored to varying degrees” by “The Weather Report,” who played songs that were “much too long and featured soloists who were imaginative, but often out of reach of their audience.” Eric Gravatt was “a very steady drummer,” and Dom Um Romão “looked like an overly ambitious Swiss bell ringer as he performed a continuous shake-along with the rest of the group.”

The second connection has to do with Earl Turbinton, who turned in such a beautiful performance on soprano sax on Zawinul’s 1971 eponymous album. Turbinton hailed from New Orleans, where Joe got to know him while he was a member of Cannonball Adderley’s band. I wrote about that here. As I said in that article, Turbinton–who died in 2007–often said that he was asked to be a part of the original Weather Report, but turned down the offer in favor of touring with B.B. King–a gig that would have been more steady and financial secure. The Weather Report story is highly improbable, but it wouldn’t be surprising at all that Joe and Earl talked of forming a band after recording Zawinul in August 1970.