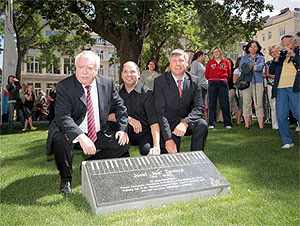 Earlier this month, the City of Vienna dedicated a new park in Joe’s honor. It is located in the Landstraße district, where Joe grew up.

A monument for Joe was placed in the park. A piano keyboard is chiseled into the stone along the top, and it includes a short tribute to Zawinul’s achievements. Vienna Mayor Michael Häupl was on hand for the dedication, along with Joe’s eldest son, Tony.

Meanwhile, Joe Zawinul’s Birdland closed last fall due to financial difficulties. At the park dedication, Tony indicated that he hopes to reopen Birdland in 2010 at a different location, with a different character from the original club that was set in the basement of the Vienna Hilton.

More information can be found at austriatimes.at.

UPDATE: Visitor Romain Labaye points out that it is Erich Zawinul, not Tony, in the photograph. The articles about the park refer to Tony, but it appears they were mistaken.

Last month the Scott Kinsey Group made a pair of rare San Francisco Bay Area appearances at the Kuumbwa Jazz Center and the Bach Dynamite and Dancing Society. Along with Kinsey were Scott Henderson on guitar, Kirk Covington on drums, and Rufus Philpot on bass.

I’ve written about Kinsey before, so I won’t repeat myself, other than to say if you get the opportunity to see his band live, it is well worth it. Instead, I want to say a few words about Henderson. He was the first guitarist in the Zawinul Syndicate, and I recall seeing him with Joe at Kuumbwa around 1992. So it had been 15-plus years since I last heard him live, and I must say, the man can play the guitar. It is obvious that he takes great care with his tone, but more importantly, his solos were consistently interesting, inventive and musical. Henderson fronts his own blues band, and on both night’s Kinsey’s band performed a blues tune that he tore up. I think Henderson is in very select company on his instrument. In short, he makes the guitar sing, which is about the highest praise I can think of for a guitar player. It was really a joy to listen to him.

For a healthy helping of Henderson, give his blues album Live! a try. Plus, Tore Down House, an earlier blues outing, is worth having for the song “I Hate You” alone — a classic lyric in the blues genre. :-)

Henderson was with Zawinul for about four years. A few months after Joe’s death, in response to a visitor’s question, Scott recalled some fun stories on his discussion forum:

Playing with Joe was one of the highlights of my career. Just listening to him play every night was awesome. I don’t know if those stories about Mozart were true like in the movie, but I can definitely tell you that Zawinul did it. Everything he “composed” was an improvisation right on the spot. He was a musical genius to say the least. Plus he was an extremely funny guy with more confidence than anyone I’d ever met before.

One time I was overdubbing in the studio for him and I played something I didn’t like – I told him I didn’t like it and asked to do it over. Joe said “if you didn’t like it, what the fuck did you play it for?” I don’t think he could even conceive of playing something and not totally digging it, because everything he played was a motherfucker.

My favorite story about Joe is that he was always trying to get me to smoke pot and drink with him before the shows, and I told him, man, I can’t play on that shit. But after getting sick of him bothering me for months about it, I smoked a joint with him and got really wasted before a concert in Austria. I was having a great time until we hit the stage, and I fucked up every melody and couldn’t play shit on my solos. It was a disaster. Then after the gig, Joe comes up to me and yells “Henderson! How many fuckin’ times have I told you not to do that shit before a gig?” I have a million stories about my experiences working with Joe, most of them funny, and enough to fill a book.

“If you didn’t like it, what the fuck did you play it for?!” Ya gotta love it.