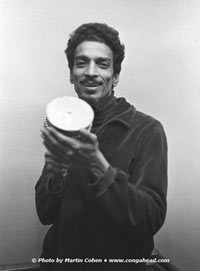 Brazilian drummer and percussionist Dom Um Romão died July 26 in Rio De Janeiro of a cerebral hemmorage. He was 79.

Romão was Weather Report’s first touring percussionist, getting the gig in 1971 on the recommendation of Airto Moreira, who recorded on the band’s self-titled debut album. Shortly after that album was recorded, the band toured Europe and Zawinul had hoped to get Airto for the tour. But he declined Zawinul’s invitation, having already committed himself to Miles Davis. Instead, Airto recommended Romão. In Brian Glasser’s Zawinul biography, In A Silent Way, Airto explained, “Flora [Purim, Airto’s wife and Romão’s wife before that] and I called Dom Um Romão in Miami, who’d played in Brazil ’66, and asked him whether he wanted to play with the group. He said, ‘Well…yeah.’ He drove from Miami to New York, and I gave him part of my percussion to let him do the gig. He rehearsed and they liked it, and took him to Europe on the first Weather Report tour with my percussion, because he was a drummer then. I mean he could play percussion, but he didn’t have the stuff–it was still in Brazil.”

It was Airto’s way of returning a favor. “Joe Zawinul asked me if I knew a percussionist who could play in roughly the same style as me,” he said in a 1999 Jazzwise interview, “so I told them about Dom Um Romão and Joe said ‘OK we want him if you recommend him’. So in a way I paid him back for being such an inspiration to me earlier in my career. I paid him back for those licks I learned from him back in Rio.”

Romão stayed with Weather Report for three years, recording I Sing the Body Electric, Sweetnighter, and Mysterious Traveller. In addition to his sizable contributions to those albums, his solos during Weather Report’s live shows are still remembered by those who saw them. “I wasn’t given any instructions,” Romão recalled to Glasser. “Zawinul often used to tell people what to do, but never me. I didn’t tell him how to play piano either! I’d just listen, then fit in. We did lots of rehearsing–everyone wanted it to be as good as possible.”

One thought on “Dom Um Romão Dies at Age 79”