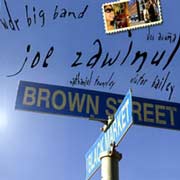 Brown Street, the Zawinul/WDR Big Band album due for a November release in Europe, will be distributed in the United States by Heads Up International, a division of Telarc. Plans call for a January 2007 release in the US, but those things have a habit of changing, so stay tuned.