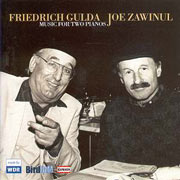 The Zawinul/Friedrich Gulda album, Music For Two Pianos, which we talked about back in November 2005, was released on June 15 on the German Capriccio Klassic label. This CD documents Zawinul’s duo performances with Gulda in 1985, and provides a rare opportunity to hear Joe play acoustic piano extensively. So far as I know, there is no US distribution for this CD, but it can be obtained from various sources in the UK, including Presto Classical.

Also in the works is the Zawinul/WDR Big Band album of Weather Report tunes. The latest I hear is an October release.