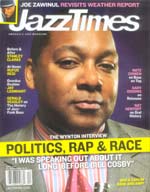 The April issue of JazzTimes magazine has a definite Zawinul flavor. First off, there’s a feature article on Joe by Geoge Varga, in which Zawinul looks back at the Weather Report years while discussing the recently released Brown Street. There’s also a favorable review of Brown Street in the Reviews section, as well as an article by former Syndicate bassplayer Gerald Veasley, “History of Jazz-Funk Bass.”

Finally, Stanley Clarke is the subject of the Before & After column. First up is “Port of Entry” from Weather Report’s Night Passage, followed by “Good Question” from Mike Stern’s album Who Let the Cats Out, featuring former Syndicate bassplayer Richard Bona.