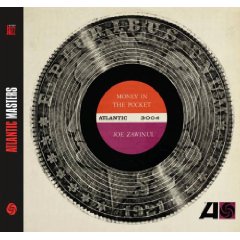 Warner Jazz has reissued a remastered edition of Money In The Pocket, Joe’s first album recorded in the United States under his own name. Originally issued in 1965 by Atlantic Records, this was the first of three albums Joe recorded for Atlantic Records and producer Joel Dorn, the others being Rise And Fall of The Third Stream, and 1970’s Zawinul. So far as I know, it is only available in the UK, but stateside fans can purchase it via Amazon UK.